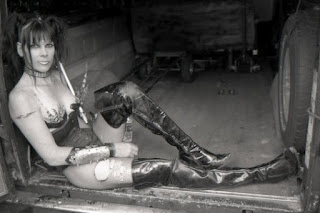 I first saw her on stage at Don Hill's. My friend Dahlia insisted we go see her and her band "You'll really dig' em."  I did. And her stage show blew me a way. No wonder Siren Magazine called them "the most visually arresting band you'll ever see."  The sound, then, was part The Cars, with a dash of Bowie, spiced up with punk and all mixed into a concoction of dark glam. I interviewed her shortly thereafter, and we have been friends ever since. Some months back, just before the release of her latest album 10 Bones, we caught up for breakfast and a chat at Yaffa Cafe in NYC's East Village.

When and how did you start your music career?
I've played music since I was 10 when I got my first acoustic guitar, but I didn't start singing till I was 20. That's when I consciously started to tackle music as a career with my first serious band: Straight Face. We attracted a management company in Minneapolis, and moved down there with the promos that they would began to shop us around… but shortly after we'd made the move to Minneapolis, the management company went bankrupt. We got a few gigs, and a recording session for an E.P, but any additional help evaporated, and we broke up within a year after that. 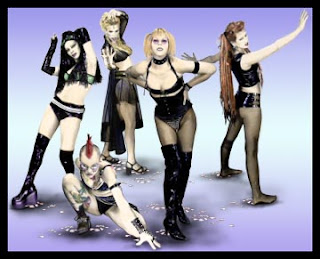 I continued on and released my first solo album: "Animal Angst" under my birth name "Steven Grandell"  and create a band:"The Loud," and gigged just for a summer attempting to get the new album off the ground, but the press was terrible, and it died, and I gave up on the band; I went into performance art, film-making, and painting. (the funny thing is that that initial album is now a collectable album. And it ended up being somewhat popular in Germany.

In the early 90's the drummer for Straight Face wanted to re-form that band, and I gave it a try, but we couldn't get everyone back together, and that's when we ended up founding "All The Pretty Horses."

When did you start your own label?
I started one with the release of my first solo album: "Animal Angst." Then I started a second one Skin Dog Records, when "All The Pretty Horses" was formed and we released our first album: "A.T.P.H."  I continue to run that label today.

We did release one album on Twin Tone Records entitled  "Queens and Angels." TwinTone had just diversified then, and took on the name TRG ("TwinTone Record Group,") and we were on the main label for that release. But our inclusion in the label caused a rift within the ownership because of our image, and I suppose perhaps my being transgender. Our album never was taken seriously by the label, and shortly after it's release, that label also went bankrupt -- when it attempted to become the first digital only record label, pissing off their distributors, who called in all their debt and caused the company to collapse. At least that's what I understood. We never saw a cent from that album.

Did you do any investigation before launching your label?  Books?  Talk to anyone?
No, it was the punk era of D.I.Y. Everyone had their own label in order to sidestep corporate America. It was just in the air… I learned by trial and error.


What has been the biggest surprise as an independent label?
That it actually worked!!

What was the biggest disappointment?
That it only worked to a point, and all investments have had to be from me and my credit cards… that sucked and still does!!

What had been the valuable lesson?
Persistence can help.

How has your music evolved from the first to this newest?
I think my experience has developed my lyric, and the time I've spent screaming onstage has finally had the effect of allowing me to actually develop an actual singing voice.

How has having to wear both creative and business hats affected your creativity, or business decisions?
I know how the biz works… and how it doesn't work. The freedom of owning your own label means you can record and write the music you want… the down side is that you're constantly worried and stressed, and those things eat up your creative energy.

Has the new digital music landscape provided more opportunities or less?
Both…. It's given us real independence and an even playing surface with the potential to attract national attention, but with that the competition has also risen. Everyone has a bedroom studio which can function as well as most big label studios if the right care is taken… getting the promotional leverage to push your recording is the trick. It's still so easy for the big labels to just pour money into that for their artists. But the side and back doors that the digital landscape has opened, can on occasion break that grip.

What advise would you give to new artists looking to pursue an indie path?
Do it… but do your homework… there isn't anyone out there anymore who's really wanting to work with you as your partner to help you make money…anyone out there who tells you they can give you a promotional service
actually considers you as their end costumer now; as opposed to the old days of real old-style promotional agents and managers who really did team up with you and won or lost along with you. You are no longer the artist in search of a true management service, you are now only the end customer, that "Management Services Industries" prey on.  You truly are on your own in the new landscape.

What is the current objectives and marketing plan to get there?
Either figure out how to become a desired entity on a scale large enough to blow past the parasitic low and mid lever management service industry types. Attract the upper people who may take a serious interest in your work… OR forget all that, and just make your music available in a smart and well situated way so you actually DO get your royalties and download cuts per song sold or utilized. Watch your investments, and work as close
to your financial abilities with as low risk as possible to extend your career's life.

Thanks for taking the time to share your thoughts, and perhaps helping other aspiring music divas out their with a dream.

My pleasure, thank you for the plug.

Click here to hear samples and/or buy 10 Bones we have to support our own girls!
Posted by candidlytransgender at 3:10 AM