Chicago In an About Face 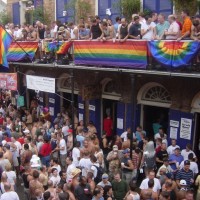 It was in 2003 that I first met Mother Flawless Sabrina, a longtime downtown legend in New York City.  She was also the founder of the first national pageant for transgender girls.  Back then, in the 1960s, we could be arrested just for being dressed up and out in the street" she noted.

She told me specifically about Chicago, and the abusive nature of the cops there.  "We couldn't even call it a trans pageant, or a Miss Gay pageant back then: they'd raid the event. So we just referred to it ass Miss Chicago, or Miss Boston, etc."

After more than two years of pushing by transgender-rights advocates, the Chicago Police Department (CPD) has quietly adopted a general order that mandates the respectful treatment of transgender detainees.


The policy has been a major goal of more than 30 community groups, which pushed for the order both within CPD and through a proposed city ordinance. According to the CPD website, the policy went into effect Aug. 22.

"This general order is a huge step forward in a couple of ways," said Jennifer Ritter, executive director or Lakeview Action Coalition (LAC), which began work on the order in 2010.
The order mandates that police not search transgender people in an attempt to determine their gender, that officers respect preferred names and pronouns for transgender detainees and that they not use someone's gender identity as assumed cause for a crime. It further bans derogatory language against trans people.

Posted by candidlytransgender at 4:42 AM