India Decriminalizes Homosexuality. What does that mean for you? 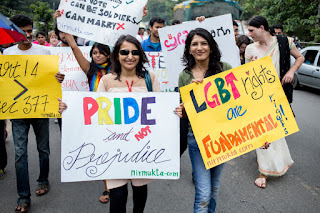 Like many countries that don't, or can't, fully comprehend the difference between gender and sexual orientation, India has joined many countries that have legalized homosexuality. What does that mean for you?
Gender irientation and sexual orientation for many are the same thing. Of course, they're not. But when the gay communty makes strides if subsequently aids the transgendered community as well.

While we may define ourselves as 'straight women', despite our biologial status, the world still see us ass homosexual men simply dressing up as woman.  Se la vie.


India’s supreme court has voted to strike down the 160-year-old law that criminalised homosexuality across the country, reports the BBC. The historic ruling comes after years of campaigning and protest from India’s LGBT+ community and overrules a 2013 judgement that upheld the colonial-era law.

Regardess of its specific implications to the smaller niche communites contained within the LGBT communities. this Supreme Court ruling was cause for celebration, and so, they celebrated:


It seems to me that any  forward-motion on equal rights, of any kind, is a step forward.
Posted by candidlytransgender at 12:52 PM