Where to Go For Pride Month 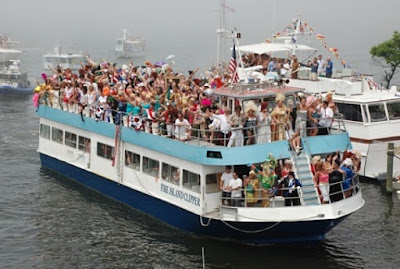 Pride is a time when we come together with the larger LGBTQ community to celebrate us. While onlookers think we're flaunting our deviance, we're actually celebrating being free to be who we are. Here is a list of where the best pride events are happening.

Coming out and living in NYC, for me pride meant being in one of two places: either watching the pride parade in Manhattan, or heading out to Fire Island to partake in the Invasion of The Pines.

If you're from NYC read on, if you're not, then check out Pride events around the country HERE.

According to a news report, The NFL and MLB will be making their debut in the parade, joining the NHL, NBA and WNBA on June 24.

But for those that love the beach, 90 degree weather, and fabulous outfits, then The Invasion might be your better bet. I had covered the Invasion of the Pines going all the way back to 2001. It began with a few drag queens going to the Pines, a gay boy enclave on Fire Island, where they were snubbed: the bartender wouldn't serve them. They took the water taxi back to Cherry Grove and rounded up a few more 'girls' and then proceeded to "invade" the boys 4th of July. Each year the size of the Invaders grew. And at some point over the years (no one recalls exactly when) the hostility between the two groups evolved into kindred spirits -- at least for that weekend once a year -- where the boys not only welcomed the 'girls' to their enclave, they celebrated them.

Invasion of The Pines begins at Cherry Grove where the invaders load onto a ferry and 20 minutes later arrive in the port of the Pines to thousand of cheering fans -- gay, straight and trans. They debark from the ferry down the gangplank where they are announced to the crowd one by one, head into the bar for dancing and drinks, leave later that afternoon and return to Cherry Grove for partying and festive events, like fashion shows etc.

To get to the Invasion take the train out of Penn Station (or Jamaica) to Sayville (Long Island). From there, when you exit, there are shuttle vans ($5) that will take you the short 7 min ride to the ferry docks. The ferry schedule is here.

p.s. July 4th weekend is hot on Fire Island, usually in the 90s so dress accordingly. Be sure to check out our Tips section for fashion, makeup and more.

Posted by candidlytransgender at 12:55 PM