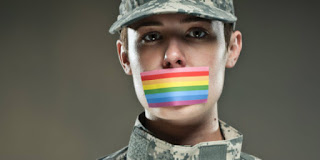 President Trump caught the entire military by surprise when he tweeted some months back that transgender people would be barred from joining and serving in the military. In a rare circumstance it looks like the courts are going to support the trans community despite the Commander In Chief's opposition to it.
"In July, Trump tweeted that he had decided he would “not accept or allow transgender individuals to serve in any capacity in the U.S. military.” The tweet came with little, if any, advance consultation with military officials, who have not shown much enthusiasm for reinstating the ban."

Four judges thus far have opposed President Trump on constitutional grounds. The Department of Justice disagrees with the rulings and says they will evaluate their next steps.

There is a full article about it in the L.A. Times HERE

Posted by candidlytransgender at 6:55 AM