Should We Have Transgender in the Military 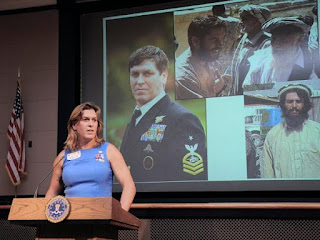 As you all know by now, President Trump, two words that still don't seem right in the same sentence, issued a Tweet that transgender people would no longer be allowed to serve in the military.  Kristin Beck, a former Navy SEAL took exception.  Other veterans have voiced their opinions, and the Pentagon -- after the president said consulted with his generals and experts -- said they had no idea what he was talking about. So it's time once again for romper room politics.

The president in another early morning my-brain-is-not-awake-yet Tweet cited conferring with his generals before making this latest rash decision. But according to the Pentagon they had no idea what he was talking about.

The president tried to make the case that the medical costs for transgender servicemen & women was too high. Yet a recently noted study by the Rand Corporation in 2016 found that the military spends five times that cost on Viagra, and when Cialis is added it is ten times (according to 2014 figures). And we all know erectile dysfunction medication is life-threatening, right?

Trump also cited "distraction" as a consideration, to which the vast majority of vets and active service-people derided on Twitter. Veterans around the country said they were disturbed by the news, voicing concern and disappointment. There were some siding with the president for "protecting their dignity," but most were aghast.

Tammy Duckworth, an Illinois senator who lost both legs serving as a helicopter pilot, immediately released a statement saying that anyone "willing to risk your life for our country" should be able to serve. "When my helicopter was shot down in Iraq, I didn't care if the American troops risking their lives to help save me were gay, straight, transgender or anything else," Duckworth wrote.

Kirstin Beck, the former Navy SEAL (pictured in the header) was interviewed by Business Insider on Tuesday, challenging Trump to meet face to face and explain why she was not fit to serve all those years.

It seems more to me that this is yet just another move from the Trump playbook: use twitter as a shiny object to distract people from the terrible job he is doing, and the ongoing Russia investigation that is getting so close he is sweating and lashing out.  Moreover, this will make his base happy. If he kicks out the gays they'd be ecstatic because those damn gays in the military is really a hardship for them while they sit on their porch with Trump rah rah banners.

At every turn we think the worst is behind us with Trump, but he just keeps proving us wrong because he is a winner!


Posted by candidlytransgender at 12:35 AM