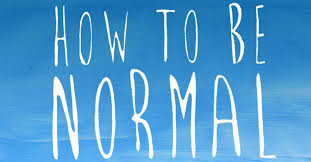 Many years ago, Johnny Carson, being the recipient of a Sally Fields practical joke, looked at her and said, "You really aren't normal are you?" She playfully responded, "Well Johnny, I guess normal is as normal does!" It was a cute punch line and yet beneath the surface made a larger statement.


What is normal anyway? How many times have you looked in the mirror and exclaimed, "What's wrong with me, why can't I just be normal?"

The answer might be that there is nothing wrong with you except that you perceive something to be wrong with you. Throughout history there have been great thinkers and doers that in their time were all considered to be "not normal or plain crazy:" Think Columbus or Galileo.

The religious leaders or political power structures of the day throughout history have typically always decreed Normal. There was a time when priests could marry, homosexuality was common among societies elite, and men wore make up, frills and satin.

So nothing is for certain and everything is subject to change. Societies often have a quiet, almost osmosis collective consciousness that develops beneath the surface. Many times this brings about change and a refocus of normal: Think slavery, the burning of witches, or the recent view of being gay.

Being gay has almost become common; everyone has one gay friend, brother/sister, or aunt/uncle -- event though same-sex marriage is being challenged by some.

Guilt and shame in the transgender community was almost the status quo until recent years, because there was a "perception" that it was, or is, not only abnormal, but also wrong. But in the end, normal is really just an opinion isn't it. It is a collective interpretation of what is right, or what God intended, or of any information from which they derive their conclusions.

Hermaphroditus
In some societies, Thailand for instance, transgender, ("Woman of the second category," "Katoey," or "Ladyboy," as they are locally known) is  generally accepted; in recent years they have allowed ladyboys to attend university, and transgender has origins in Buddhist scriptures that trace back as far as the 15th century.

Indigenous tribes around the world have stories and myths of "two-spirited people," who in many cultures were considered to be almost of a divine nature. Greek mythology speaks of the female-to-male sex-change of Caenis, and also Hermaphroditus (born son of Hermes and Aphrodite, who merged with a nymph, for which the term hermaphrodite [now referred to as intersexed] was based.

So normal is not really a constant, but rather a decision made by the majority of society based on a collective opinion of what it deems should be acceptable.

To me, when you allow society as a whole to define normal you are allowing others to define who you are and who you should be, based upon their perception. And if we are confined to a belief system based on perception, then like the Elephant o-- that as a baby had it's leg shackled to the stake in the ground, who then as an adult believed it could not break free -- , we remain bound to that perception: it becomes our reality.

So for everyone that falls outside the lines, they must be warriors, pioneers and abstract thinkers in their quest to find normal. Which is not to suggest that you should stop your own personal exploration in the quest for truth, or assume someone else's story solely because it sounds good and seems to justify your existence.

Happiness comes from within, from personal acceptance. And to experience this you must find the core of who you are, the center of your being, and then let your life develop outward from there.
But remember, that the words of others don't define you, they only define the person saying them.

Posted by candidlytransgender at 8:55 PM