Does a Flip by Caitlyn Jenner Hurt the Community? 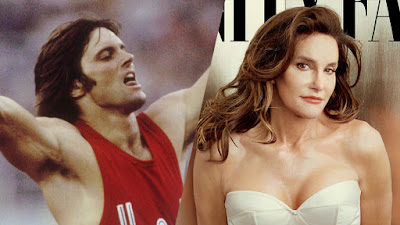 I had written a post some years ago called "Truth or Dare," In it I disclosed my estrogen experience, but also went on to discuss what it takes to keep going. Apparently Jenner never read it.

Personally I never had any wavering doubts about my own transgender status, only what I wanted to do -- or not do -- about it. I did question whether I was ready to take the full transition step, and urged others to ponder the life-altering affects of gender transition, which is much different from gender fluidity (dressing up for a night out), before lunging in.

Ten years later Bruce Jenner comes out as Caitlyn Jenner. That was never a surprise to me (it may not have been for you either) as I noticed his arched brows and early estrogen effects in the late 1980's in an ad he appeared in for a tread mill.

But when Caitlyn Jenner came out it was probably the biggest transgender media story since Jenna Tackalova made headlines challenging her disqualification from the Miss Universe pageant.  During that time I questioned whether sensationalist stories help or hurt us as a community.

When I wrote Where Would We Be Without Sensationalism? I disagreed with Tami Starlight, the executive director of the Vancouver Transgender Day of Remembrance Society, who said that there is "“almost nothing good” about the Miss Universe Organization’s announcement today hat it plans to change its rules to allow transgender women to compete.

The Caitlyn Jenner story raises publicity to an entire new level however. She brought transsexualism to the world stage, and whether it was positive or negative she ignited a world dialogue on the issue. Now that she is apparently having doubts about her gender, saying "she no longer feels like a woman," the sizzle buzz will likely go viral and bring everyone else's gender feelings into doubt.

Personally I always bought into her statements that she had struggled in the wrong body all her life. Why she is reversing course now is a bit of a mystery to me. Perhaps the intensity of her gender dysphoria was simply amplified by all those decades of being in the closet, and now, out and breathing free the intensity has dwindled.

I know that when I came out and began living as Brianna that I too felt a shift of intensity; though for me, while the intensity of the compulsion to dress was diminished, my sense of womanhood and contentment rose.

But what does her reversal mean to the greater community? Will we all now be branded as confused men that should be treated?

Sign up or login to TGlife.com/community and join the conversation in the Forum
Posted by candidlytransgender at 9:20 AM