The Transgender Kids Are Changing Everything 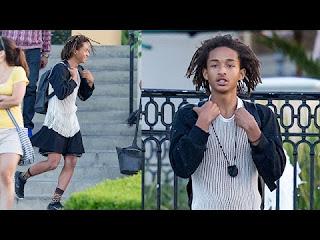 There can be no doubt that that the Internet has change everything; it's transparency, volume of opinions, and immediate access has nitro-charged worldwide discussions. Transgender expression is no exception.

Whether its discussions about terrorism, politics or gender, information equally spreads knowledge, insights and, at times stimulates fear.

But the kids, teens and young people of the 21st century simply don't take things as taboo simply because their elders say so. And they have so effortlessly presented their opinions both verbally and actions without apology or explanation.

It took me almost 40 years before I stopped worrying about the words of others.  Jaden Smith, the son of Will Smith and Jada Pickett Smith, is a prime example. He had no inhibition (it seems) about wearing dresses and skirts in public as everyday wear. Moreover he just appeared in a women's ad campaign for Louis Vuitton

Jaden is not the only teen to claim their own gender identity, or gender-fluid style during the last few years.  Most of us recall Jazz, the self-aware 9 year old that came out as trans in the face of a world that had opinions about it, and has been interviewed quite a bit (this,time with Katie Couric)as well as Josie. However, the public's opinions had no impact on what they knew to be true about themselves.

What is different about these kids and teens is not that they stand up against the scrutiny of adults who don't approve, but rather that they truly seem unaffected by any negativity aimed at them.

When I came out fully in 2001, it took me a little over a year to develop a strong outer shell that could resist such negativity, until  -- on no particular day -- I simply stopped being affected by the Words of Others.

A few years later I saw huge leaps forward, which I chronicled in "What A Difference A Decade Makes."

The young ones have been very open in interviews about their gender ID, like Kim Petras, the youngest transsexual, who was interviewed on NBC.

Caitlyn Jenner came out to a mixed bag of reviews last year: some called her hero, other's referred to as a man in drag, some women were appalled that she referred to herself as a woman, while even some in the transgender community have discounted her.

Coming out is different for everyone. Bruce Jenner was a male icon, so many though that for him to "choose" to transition must be a a media stunt, and it was an affront to some, while Teryl Lynn Fox [told me in an interview] that her family simply wondered what took so long -- being that she was girly from an early age. In fact when teaching as a male, her students thought she was a woman dressing as a man.

There has been a lot of movement in legal terms that has opened the way for people to be who they are. In the 1960s a man dressed as a woman on the street was grounds for arrest, and in some countries is still against the law -- people are still jailed for it.

Young models like Andrea Pejic (formally Andrej), Lea T., Isis King, and Geena Rocero, all of whom were transgender models have been part of a new fashion trend this past decade. And while there were other transsexual sensations in the decades before, like April Ashley, Bibi Fernandez, Lauren Foster, and many others, they were mostly either in stealth, or solely in the performing arts where crossdressing was common place. Even the recent David Bowie has been gender fluid most of his career, and his one time "supposed" girlfriend, the stunning Amanda Lear, remained in stealth -- never acknowledging that she was transsexual

When Dana International transitioned no one raised an eyebrow; Conchita Wurst (who won the Eurovision Music Festival) still sports her beard even though she dresses and presents very feminine.

In recent years Janet Mock has ascended in visibility, along with Laverne Cox.

There has now been a shift however, where one doesn't need a reason or platform to skew gender presentation. And although it stills creates some sensation among the mainstream, it isn't in of itself a sensation to these young people. They simply decide to do so, and do. And, they are very transparent about it.


Posted by candidlytransgender at 8:17 AM