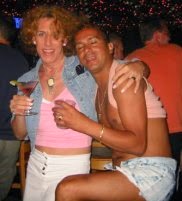 SUMMARY: Brianna Austin is writer/ columnist/ reporter -- originally from New York City, where in 2000 she came out and formed the zany Girls Club and led them on plenty of excursions into the mainstream, gay and trans communities and venues.  In 2001 they co-hosted and promoted the Girls Club- Dressing Room parties that was the rage of NYC that year, with lines out the door to get in.

Thereafter she became the New York City columnist for GIRL TALK Magazine, and a contributor to Lady Like Magazine, TG Community News, TG Guide, TG Crossroads, and NY Blade, among others.

In 2005 she and Gina Lance launched TGlife.com. Upon Gina's retirement in 2011 Brianna converted it to social network and also launched the magazine TG Reporter. In 2014 she merged the two (TGlife and TGreporter) into a single platform on TGlife.com

Brianna Nicole Austin launched her new website at briannaaustin.info where the posts from this blog and TG Life are also displayed

CHECK OUT OUR SPONSORS, they make the sites free for you:
The Breast Form Store: http://www.thebreastformstore.com/?cid=tglife
Classic Curves everything for the crossdresser: http://www.clcrv.com/index.cfm
The Transgender Center: http://www.thetransgendercenter.com/
Natural breast growth: http://natureday.com/
Plastic Surgery in Thailand: http://www.bangkokplasticsurgery.com/