I Can Read What It Says, But What Does It Mean? 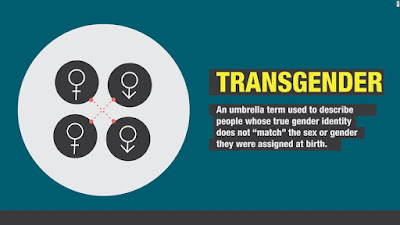 The world has changed 180 from the days in the 1980's, when to get dressed and go out I'd have to skulk around after dark in the meatpacking district of New York. Kids teens and young adults are coming out without shame. In Ireland, the government plans on removing gender change restrictions of teens under 16. Do you know your gender-related terms, and what they mean?
In the Irish Times article, they list terms with definitions. There are quite a few more that I think they missed.


LGBTQ/GSM/DSG/QUILTBAG – LGBTQ is lesbian, gay, bisexual, transgender and queer and/or questioning (sometimes with a “+” at the end in an effort to be more inclusive); GSM is gender and sexual minorities; DSG is diverse genders and sexualities. Quiltbag is queer (or questioning), undecided, intersex, lesbian, trans, bisexual, asexual (or allied) and gay (or genderqueer).

While people generally like to bundle groups together -- whether via gender, politics, religions -- those that are outside looking outside to in, typically see the entirety of a group as the same. But they're not all the same, and this more than anything applies to the term "transgender." But we'll get to that in a minute.

The term transgender term was initially coined as an umbrella term. But, instead, the term itself over time has begun being worn by and directed at, all the subgroups -- pre-op, non-op, and post-op transsexuals, transvestites,  crossdressers,, drag queens, gender-fluid etc.

This is as misrepresentative as saying a gay man and straight man are both the same because they are both "men." A straight crossdresser and a gay drag queen are just as different; as are crossdressers and transsexuals. The idea of using transgender to define all gender subgroups is confusing and dangerous.

For example, crossdressers, while they dress like women, they don't usually identify as women; many are straight (they seek women sex partners); they identify and live as male except when they are dressed up; typically don't intend to live full time as a women and/or transition; and, typically, most are not innately effeminate.

Many of us -- especially those who haven't yet come out, or are just coming out -- are struggling to make sense of our gender identity. It can be confusing. I found it to be the most conflicted, yet amazing, journey I ever made. And I emerged from it with not only a better understanding of my crossdressing compulsions but also a better understanding of myself as a person.

And for years there was the ongoing difference of opinion within our own ranks as to whether we should group us all together, or let each subgroup stand alone.


Do groups serve as a becon to those adrift of where their safe hrbor lies, or divde us?

I've often thought that subgroups were important because as navigated those uncharted waters, I began to recognize that while some looked like me, acted at first like me, they were in fact, in the core of their beings "of me": they were something else. So casting all members of the same club whose interests, desires, and goals were so different, was misguided -- not only to us, but also the outside world looking in. It makes us even more confusing.

Because someone has a compulsion as a child to wear mom's clothes -- and in later life buys their own and continues that practice --, doesn't mean they actually understand it. What it does mean is that they understand how it makes THEM feel, no more, no less.  It isn't fact, it isn't truth; it is merely opinion that is subject to change based on their future life experience. Still, many seem to search out headlines and theories to support their pre-adopted positions rather than gathering information and experience first and then rendering an opinion about it at a later date. And for anyone that challenges their adopted truth brings quick dismissal:  "You just don't get it." In fact, many times some of us do get it -- because we've been there. We just don't happen to agree.
There are those that have not explored their own transgender behavior (or others) beyond the bedroom door or perhaps an annual transgender social outing, yet continue to make careless statements that they defend with the veracity of a lioness protecting her Pride -- all based on experiences they have never had. This is neither helpful to the individual or the community, and further confuses an already confused mainstream that we should be educating.


Posted by candidlytransgender at 11:51 AM