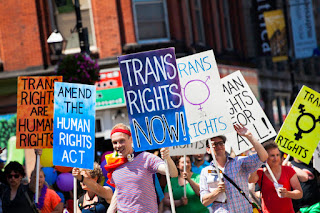 There are some basic considerations when one realizes they're transgender. The notion (by many gay and straight people) that coming out transgender is a state of confusion, or a trend to follow, is rediculous and uninformed. No one "chooses" to be transgender, they only have a choice about what to do about it.
I've had many gay freinds throught the years ask me "Why do you want to be someone else?" When I tell them, "I don't, I am simply me," it seems to confuse them.

Regardless of the topic conversion, people tend to see their own truths without the consideration that because they can't see another point of view doesn't mean there isn't one. Because one side of an argument as clearly as the sky being blue, doesn't make it correct.

What people fail to realize is that everyone is correct based on their view of the world, which was molded by their experience of life.

Regardless of whether one agrees with your choice of living transgender or not, the reality of surviving and thriving in the world is a very real challenge for transgender people.


There are shining examples of transgender people that transcend the challenges and go on to achieve great things. In the early days, most of the celebrity transgender people were in the arts and entertainment. But behind the scenes, many times living in stealth (never exposting their trasngender past),  many went on to great success. These would include people like Lynn Conway, who accroding to Wiki is notable for a number pioneering achievements.

There have been others outside of arts and entertainment as well, like Raffi Freeman-Gurspan, who was the first transgender staffer (2015) under President Obama.  But President Obama also made a high-profile appointment of Amanda Simpson in 2009, where she served as Seniror Technical Advisor to the Bureau of Industry and Secirity for he Commerce Department.

Many post-op transgender people have navigated sociaty and been successfull -- many that kep their trans past hidden. In recent years people are coming out of the shadows and rising to positions of influence, but what of the masses?

In a recent article in HUFF POST, entitled For Many In The Trans Community, Basic Financial Goals Are Out Of Reach it proposes:

Imagine for a moment that you're faced with a choice: Hide your true indentity so you can afford to survive, or risk everything from your job to your home in order to live as your authentic self.

The concept is one that many transgender people face. It's real. And it's frightening. A dear friend of mine faced this same scenario in 2002. She opted to go through with your transition, and within a short time lsot her career as systems expert. Her income plumented from six figures to working as a secretary for a time, until many years later she was able to secure another job based on her knowledge and experience. But she is not in the majority. Most lose their careers and never regain them.

In the forementioned article experts offer four ways that the transgender community can work towards overcoming the challenges.

Posted by candidlytransgender at 1:31 PM