Lynn Conway Is Being Honored November 9th -- With it Streamed Live

Lynn Conway is a computer scientist and engineer who helped to pioneer modern information technology and is a leading advocate for transgender rights. 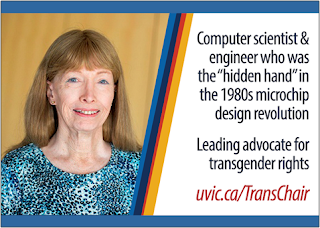 architecture at IBM in the '60s. The company fired her in 1968 as she underwent gender transition and she had to rebuild her career in “stealth” in a new name and identity.

A decade later she was teaching at MIT, co-authoring with Carver Mead the seminal engineering textbook, Introduction to VLSI Systems, innovating an Internet e-commerce system for rapid silicon-chip prototyping that led to today’s industrial models for microelectronics design and production, and receiving many high honors for that work.
Read more and get the live streaming link here >>
Posted by candidlytransgender at 3:57 PM