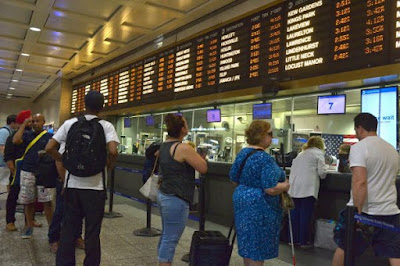 With transgender people and their rights to fair and equal treatment are thrust into the national discourse. there are many issues that are not longer so clear.

For example, the L.I.R.R. has had a long-standing anti-fraud policy of placing M (male) or F (female) stickers on their long-term passes -- n an effort to make it harder for passengers to share a pass.

When you introduce transgender into the equation it complicates things. As many of us know, when you begin transition, psychologists require you to live a year in the opposite gender before they will prescribe hormones.  And even if one can short-circuit and speed up that process, there is still a considerable period of time that the transperson is going to more than likely retain their birth gender characteristics while living in their opposite gender.

So in the case of the LI.R.R. policy, how would they play out? A male to female transeperson might be perceived by the ticket seller as female, yet by the conductor ticket collector as male. What a waste of time and energy hassling over a legitimate ticket now being questioned.

This is in some ways similar to the confusion around the state telling a young South Carolinian to remove his makeup for the driver's license photo. However, if Chase Culpepper were to do so, then the person on the license and the one behind the wheel could easily be mistaken as two separate people.

By contrast, here in India where i currently live, they are introducing "T" as a gender option, not only on trains, but also on immigration forms.

Posted by candidlytransgender at 3:32 PM

Email ThisBlogThis!Share to TwitterShare to FacebookShare to Pinterest
Labels: gender rules in public, male to female