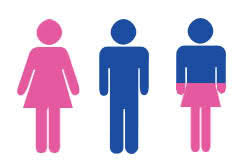 In an article in THINK PROGRESS, it noted that "A California school has settled a complaint filed with the federal government, agreeing to update its policies to be fully inclusive of transgender students. A trans student, whose identity has been kept private, filed a complaint after officials at Arcadia Unified School District prevented him from using the boys’ restroom or locker room, and also forced him to room in a cabin separate from the other boys on a field trip. Now, the school has worked out an agreement with the U.S. Department of Education’s Office of Civil Rights and U.S. Department of Justice’s Civil Rights Division to implement nondiscrimination policies throughout the district to protect both the privacy and inclusion of transgender students."

Come on people, wake up, it's just nature calling.